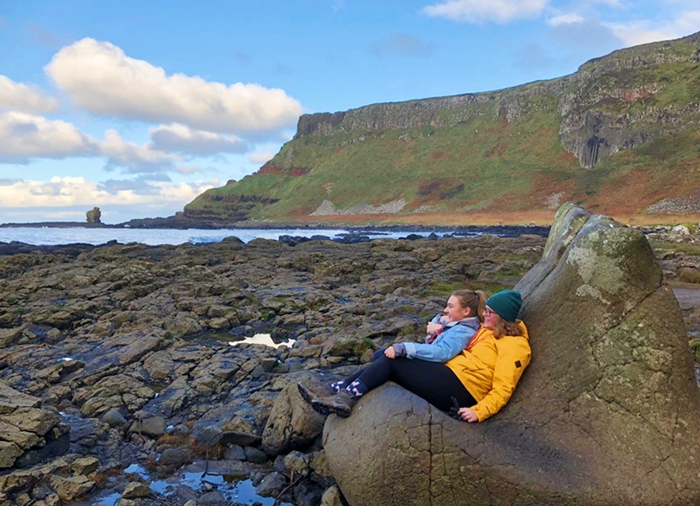 The week began with many castles – The castles of Lough Erne which was designed to introduce us to the Ulster Plantation. The first castle on Monday was called Tully Castle and had a tiny window as it’s entrance. Not everyone fit, and it was amusing to watch people get shoved through the window. It was a Gaelic Castle and belonged to the McGuire clan – the sworn enemies of the English planters who occupied the second castle we visited. We drove to the second castle nearby which was called Monea, and this time there was an actual doorway to walk through. It was cool to walk around the ruins and imagine someone living there – This castle was a plantation castle which belonged to an English Lord. It was super interesting to learn about the Plantation of Ulster, another dark period of Irish history.

After seeing the castles, we went to a super cool cave that was located under a waterfall. Fun fact, this cave is Beric Dondarrion’s hideout in Game of Thrones. We had to hop over some slippery stones across a raging stream to get to it, but the cave ended up being very cool. After the caves, we did a super steep, but fairly short, hike to a lookout point. My legs were burning, but the view was worth it.

We went to another castle on Tuesday morning! This was different from the other two because not only was it bigger, but it was totally taken over by vines and trees. We spent quite a long exploring the overgrown castle. Some of us even went into the dungeon. After checking the place out, we went back home for lunch. We got all bundled up and went outside to learn how to plant willows in the field next to our house. It was very cold and rainy. We had chili for dinner to warm us up (thank you, Rita!). A few of us are convinced the house is haunted, and Killian and Sarah were feeding me ghost stories about my room, so I moved into Eliza and Mari’s room for the night. It was a spooky sleepover!

We drove to the Giant’s Causeway Wednesday morning. The landscape was absolutely stunning with cliffs looming over us on one side and the ocean on the other. It is said that the land was shaped/moved by giants, but in reality, it was formed by magma from volcanoes.

After taking lots of photos and exploring the hexagonal shaped rocks, we got on the bus and drove to Belfast. On our way, we stopped at the Dark Hedges where a scene in Game of Thrones was filmed. I think I was the only one who was excited about it. The drive to Belfast was long, and I totally passed out. We got situated in the hotel and then went to get pizza for dinner. Sarah took some of us to a pub called Filthy McNasty’s where it was open mic night. Most of the performers weren’t great, but there were a few that were awesome. It was fun to hang out with Sarah and Joe.

We were on our own for breakfast on Thursday morning. Eliza, Mari and I went and had some delicious waffles and coffee. Luke was very excited that there was a Tim Horton’s near our hotel. We all met up and did a super cool art tour around the city. It was nice to see all of the amazing murals and hear about their backgrounds, even if it was quite cold. After the tour, we had free time for lunch and exploring on our own. Later, Sarah and Joe took us to a homemade movie theater in the back yard of some guy’s house. It is easiest to describe it as a super decorated shed. But it totally felt like a very small movie theater. We watched “The Gaurd”, a very funny and dark Irish film, and had pizza for dinner.

We drove back to Bundoran early Friday morning and had the rest of the day free. That night, we celebrated Dylan’s 19th birthday.

Saturday morning, we drove to the Bundoran lifeboat station/RNLI to get a tour from Chris. He is a volunteer there, so we got some good insider info about the job. Chris made Alyse get into a suit (that the volunteers wear), and sprayed her with a hose to demonstrate how waterproof it is. It was very funny. Afterward, a few of us went on a walk along Tullan Strand and through the sand dunes with Chris. We got free hot chocolate at his sister’s shop, The Salty Fox.